By Dr Yves van Gennip; Lecturer in the School of Mathematical Sciences at the University of Nottingham

The GeoEnergy Research Centre helped to sponsor this event

On Monday 29 February 2016, in the stately Council Room of the University of Nottingham’s Trent Building, some thirty mathematicians and scientists gathered for a day of talks and posters about big inverse problems. This one-day meeting was one of four London Mathematical Society (LMS) meetings on inverse problems that are being held every year at various locations in the UK. 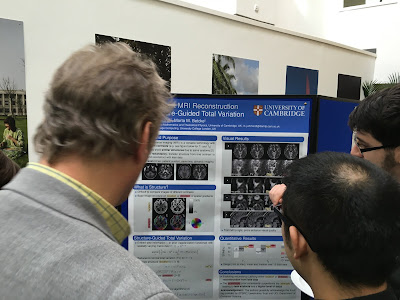 In the words of the American mathematician Joseph Keller, two problems are ‘inverses of one another if the formulation of each involves all or part of the solution of the other. Often, for historical reasons, one of the two problems has been studied extensively for some time, while the other is newer and not so well understood. In such cases, the former problem is called the direct problem, while the latter is called the inverse problem.’ (Keller, 1976) In practice such inverse problems often deal with reconstructing model parameters from observations, where the generative process which produces the observations from the parameters is (approximately) known. Nowadays, with ever improving data collection technologies and methods, the number of observations of a given process can be very large. Dealing with such big inverse problems requires new mathematics, posing new theoretical questions and promising even wider applicability.
The five speakers on the day represented well the diverse range of topics and techniques that are captured under the banner of inverse problems. Prof. Felix Herrmann (University of British Columbia) kicked off the day with a talk about randomised sampling in exploration seismology. He was followed by Dr. Natalia Bochkina (University of Edinburgh) who spoke about Bayesian inverse problems under possibly misspecified nonregular likelihood.
During the lunch, which was provided in the modern atrium of the School of Mathematical Sciences, several posters were presented on diverse topics ranging from probabilistic numerical methods for nonlinear partial differential equations to motion correction in dynamic contrast enhanced magnetic resonance imaging. Later in the afternoon a poster prize was awarded to Lia De Simon for her poster on the quantification of the uncertainty in thermal properties of walls by means of Bayesian inversion.
The high quality of posters and talks thus far, was continued into the afternoon with three more interesting talks. Prof. Simon Arridge (University College London) presented the computational aspects of photoacoustic tomography. Matthew Dunlop spoke about hierarchical Bayesian level set inversion, before Dr. Marcelo Pereyra closed the official part of the day with a presentation about the fast proximal Markov chain Monte Carlo method.
­
The success of the day was celebrated with a drink in campus bar Mooch, but reconstructing an account of that academic endeavour is left as an inverse problem for the reader.
The next LMS Inverse Day will take place during the British Applied Mathematics Colloquium in Oxford on Friday 8 April 2016.